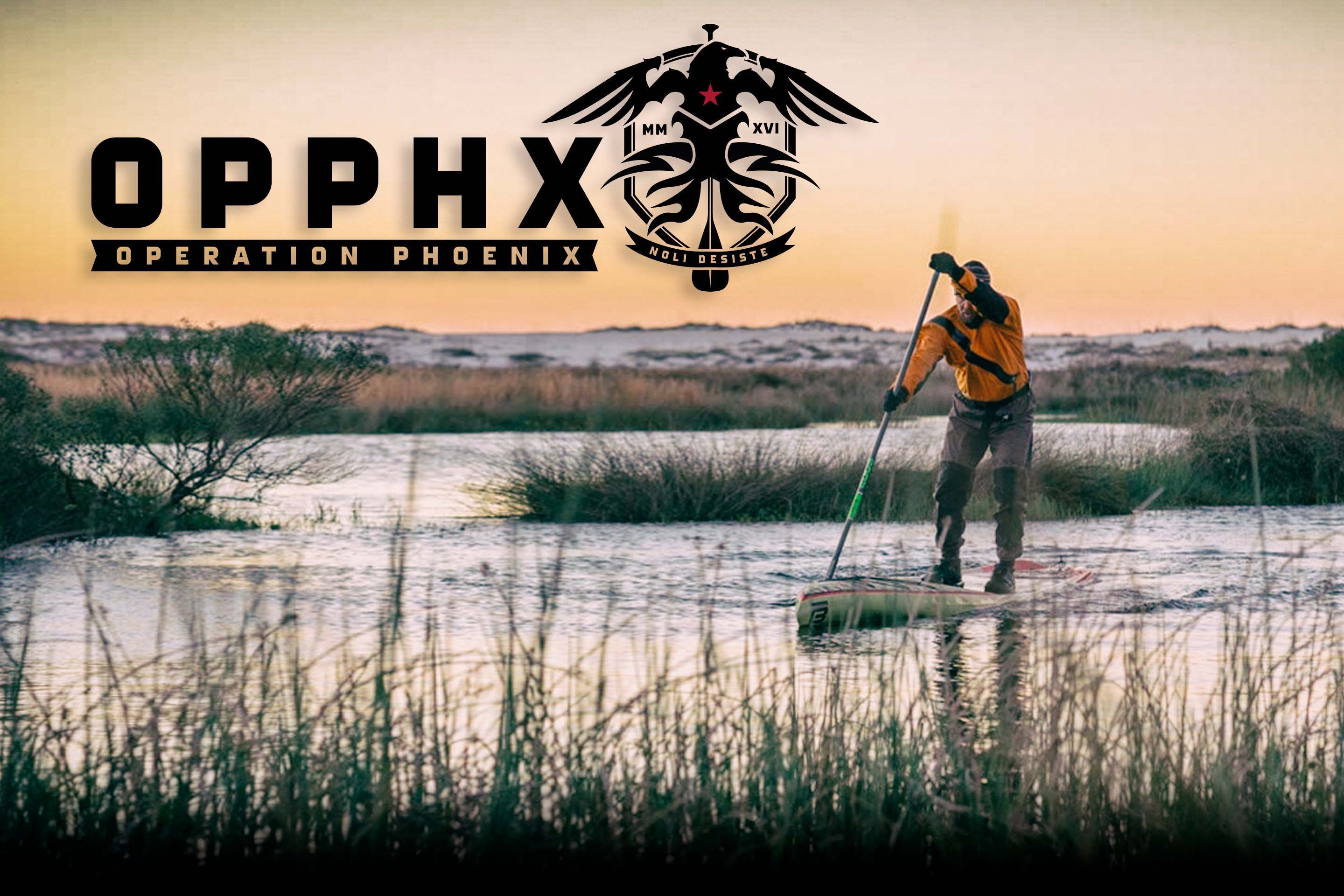 To most, paddling every day through grueling winds and waves over the course of four months, 3,500 miles from Texas to New York, sounds like a death wish. To Josh Collins, it sounds like a new beginning.

Josh is a Special Operations combat Veteran with multiple rotations to Iraq, Afghanistan, and Bosnia, along with numerous other deployments around the globe in support of the War on Terror. Moreover, Josh is a wounded warrior with seven documented traumatic brain injuries (TBI) with loss of consciousness—four from explosive blasts, two by parachute landing falls, and one more from combative training.

After he retired in December of 2008, Josh continued to support the military as a contractor both stateside and abroad. It was during an elite Special Operations training exercise in 2013 that he sustained another major concussion, complete with fractured nose, ribs, and cervical spine compression, putting him over the edge.

“I couldn’t function through the day without extreme headaches, fatigue, and disorientation. I never had problems psychologically until I had problems with my head from the TBI’s. It’s like this: If a record is skipping, it could be that it is scratched (PTSD), or that the record player itself has a broken/cracked needle (TBI). The combination of TBI and PTSD exacerbates both issues. The VA has a much easier time diagnosing PTSD because the environment and horrors of combat are undeniable, but unlike TBI, they can medicate and call it a day. This is why I began to ‘self-medicate’ heavily with alcohol until I was up to well beyond a bottle of hard liquor a day.”

This deathly combination of prescribed meds and alcohol not only tore his family and marriage apart, but it completely turned Josh into a different person. “I did not know my husband anymore,” his wife Tonia stated. “So I did everything I could to bring him and our family back to what we were, and that’s when I found the Task Force Dagger Foundation (TFDF).”

Task Force Dagger Foundation is a United States Army Special Operations Command based organization dedicated to providing assistance to all wounded, ill, or injured members and their families. Established in 2009, TFDF is a federally recognized non-profit foundation that supplies emergency funding to those SOCOM service members and their families who cannot afford the proper care.

With their help, Josh was immediately taken to the James A Haley VA Polytrauma Unit in Tampa, FL where he underwent TBI therapy and after three months, was returned to his family where he was able to rebuild his marriage and life. Although Josh was beginning to reconstruct the foundation of his former life, he was still suffering from severe inner ear (vestibular) damage, right eye nerve palsy, and vertigo from a compressed cervical spine at two levels. After receiving more than a dozen surgeries to correct some of these problems, Tonia purchased Josh a stand-up paddleboard in hopes of getting him exercising again. However, Josh quickly found that it helped with more than just his physical fitness. In Josh’s own words, “Standup paddle boarding brought balance back to my life.” Finding solace on the water was a huge achievement for Josh, but he was surprised at how simple of an idea it was that paddle boarding could so easily help his TBI. “When I’m on the water, everything around me stops moving. The horizon holds still because of the subtle movements of the water. It is my sanctuary.”

Having departed for many missions in the military, Josh knew he would be departing for one of the most important missions of his civilian life—helping other veterans in need. More than twenty two veterans a day are taking their lives, and this now accounts for more than ten times the number of casualties overseas due to lack of help and over prescribing meds for TBI and PTSD. In an effort to raise awareness of these statistics and help raise money for the foundation that helped save Josh’s life, he came up with a plan to make the longest journey ever paddled.

Josh knew this was a huge endeavor and that he would need all the help that he could get. In hopes of finding a standup paddle board company to support his cause, he reached out to BOTE in Fort Walton Beach, FL. “We do everything we can to help our military locally,” says Corey Cooper BOTE Owner and CEO, “When Josh approached us with his idea seeking a partnership and support, we instantly knew this was something we wanted to be a part of."

After multiple phone conversations with BOTE’s team to discuss board ideas, Josh told his story and everything he went through to re-gain his life, and just like that, Operation Phoenix was born. “We were talking about board designs and how we would like this board to inspire people from all walks of life, when it hit us—The Phoenix rises from the ashes and is stronger than it was before—which is exactly what Josh has done,” states Cooper.

To make the process even more interesting, a few days after having asked their Creative Director, Rob McAbee, to create a logo with the phoenix, he returned with an addition that had not been talked about previously.

“I’ve also added a little something to the bottom,” said Rob. “‘Noli Desiste’ it means ‘Never Quit,’” to which Josh quickly replied with a picture of a tattoo on his arm also transcribing “Never Quit.” Cooper exclaimed, “Every single one of us had chills in that moment that we received the picture of Josh’s tattoo. We knew this was going to be bigger than us.” For the next couple of months, Josh and BOTE worked together to make the boards and prepare for Josh’s expedition that would now be noted as “OPPHX.”

The expedition entails a four month long paddle beginning in March from Corpus Christi, TX to New York City, NY with rallies being held along the way. “I want to bring the military families and their surrounding communities together to get them out on boards and raise money for TFDF. BOTE will not only be supplying limited edition ‘Operation Phoenix’ (OPPHX) boards for Josh to take on his four month long paddle, but they will also be supplying the same limited edition boards to be raffled off at the rallies and sold on their website alongside other OPPHX apparel and accessories. A portion of the profit for all OPPHX sales from BOTE will be given to the TFDF.

Although Josh will be making this voyage on his own, his hope is that at these rallies, with the support of local SUP companies, people will get out there and join his journey, even if it’s just for a mile. “People don’t realize that anyone can paddle, even if you’ve never stepped foot on a paddle board before. Nothing would make me happier than to see paddling helping other’s with TBI and PTSD too.”

When asking Tonia how she feels about the trip she says, “Of course I am worried about Josh—there will be some days that he will be paddling in twenty mile per hour winds and white capping waves—but seeing the passion and purpose that he feels for this cause on a daily basis shows me that this is what he is supposed to be doing.”

Success is something that most would find hard to define with this mission—there are many factors that can affect Josh arriving to his final destination—but for Josh “Success for me doesn’t mean making it to New York. Success is raising enough money to save more lives. Even just one life would make this all worth it. But I have not quit anything thus far in my life and I’m not looking to start now.” 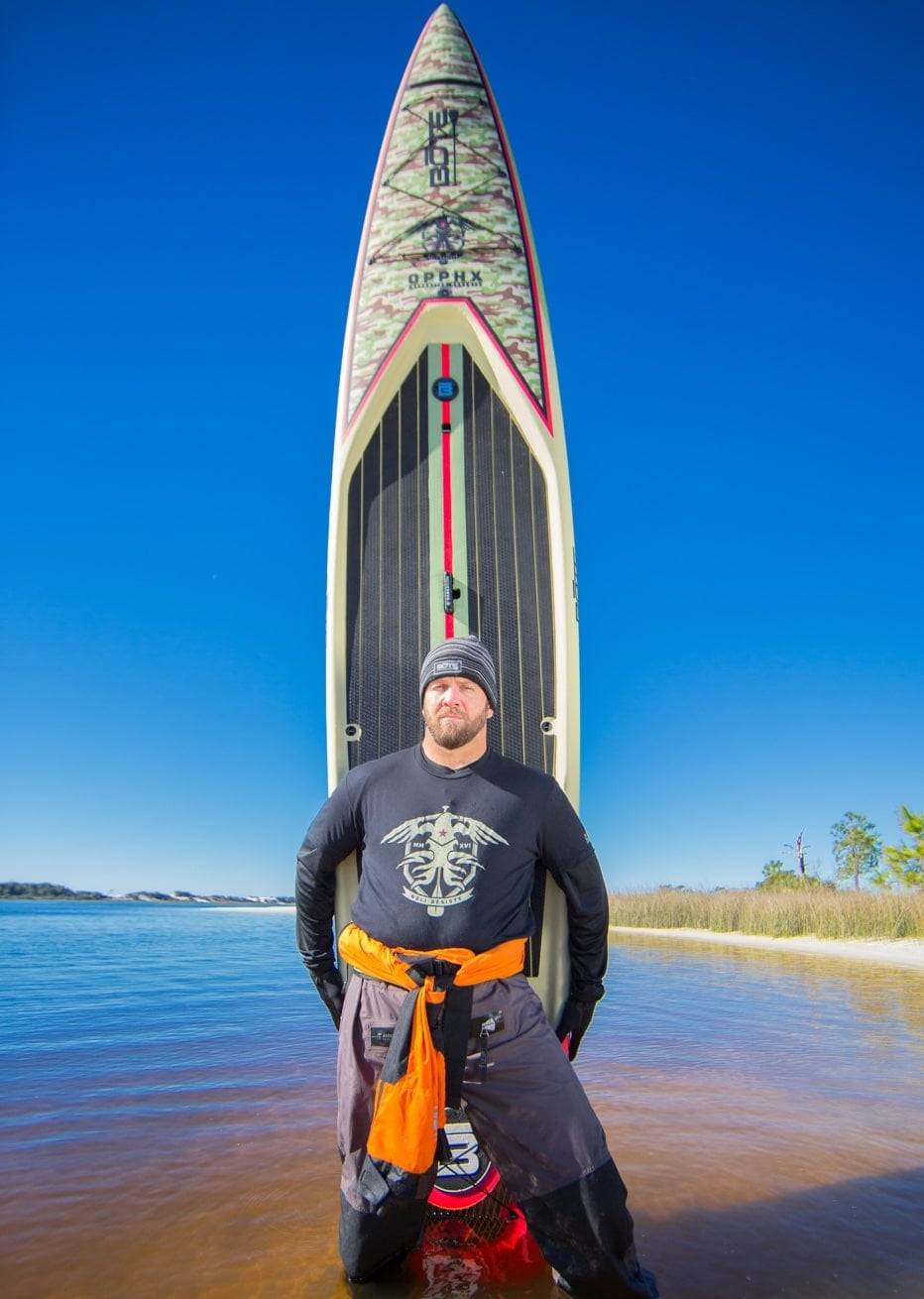 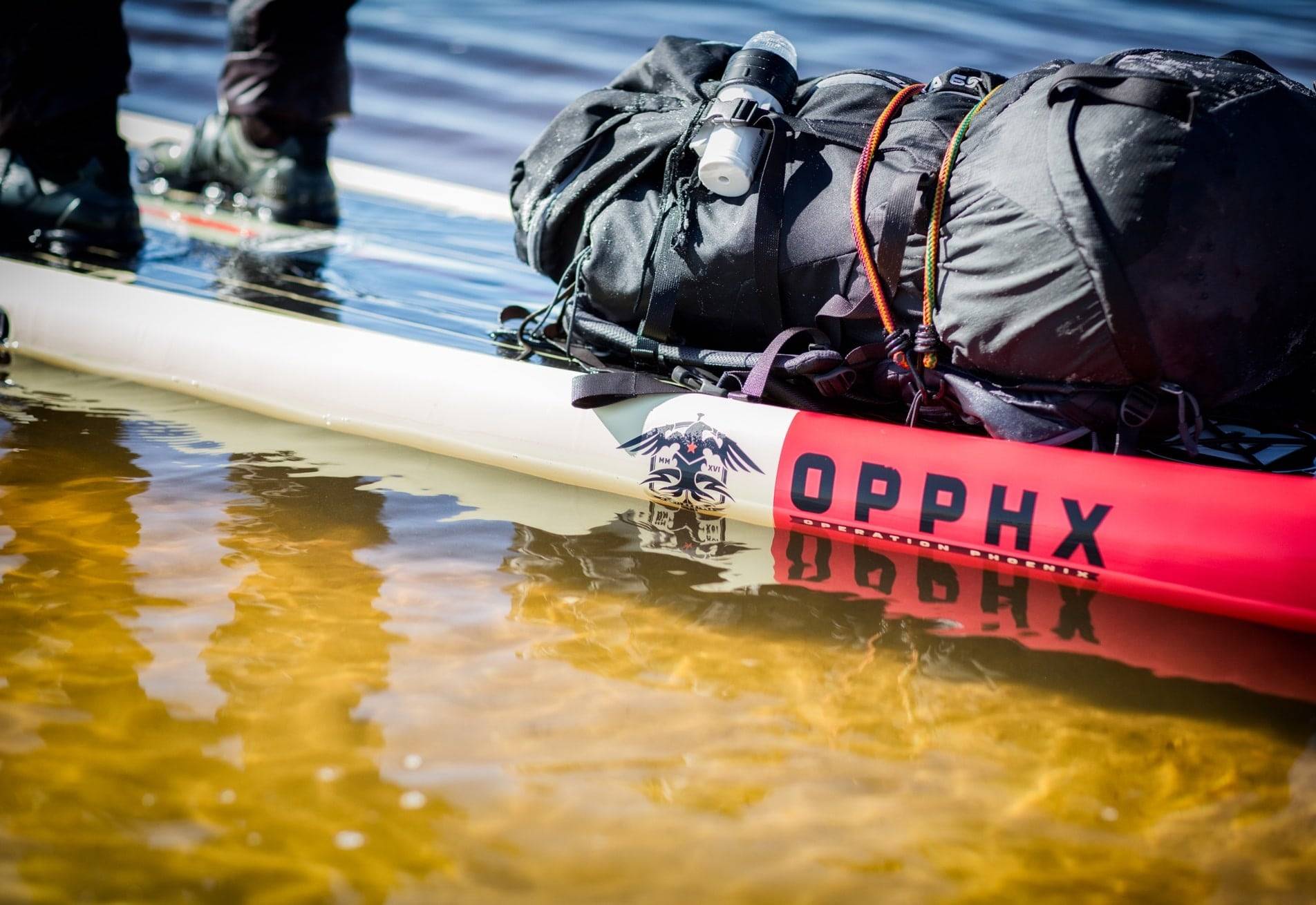 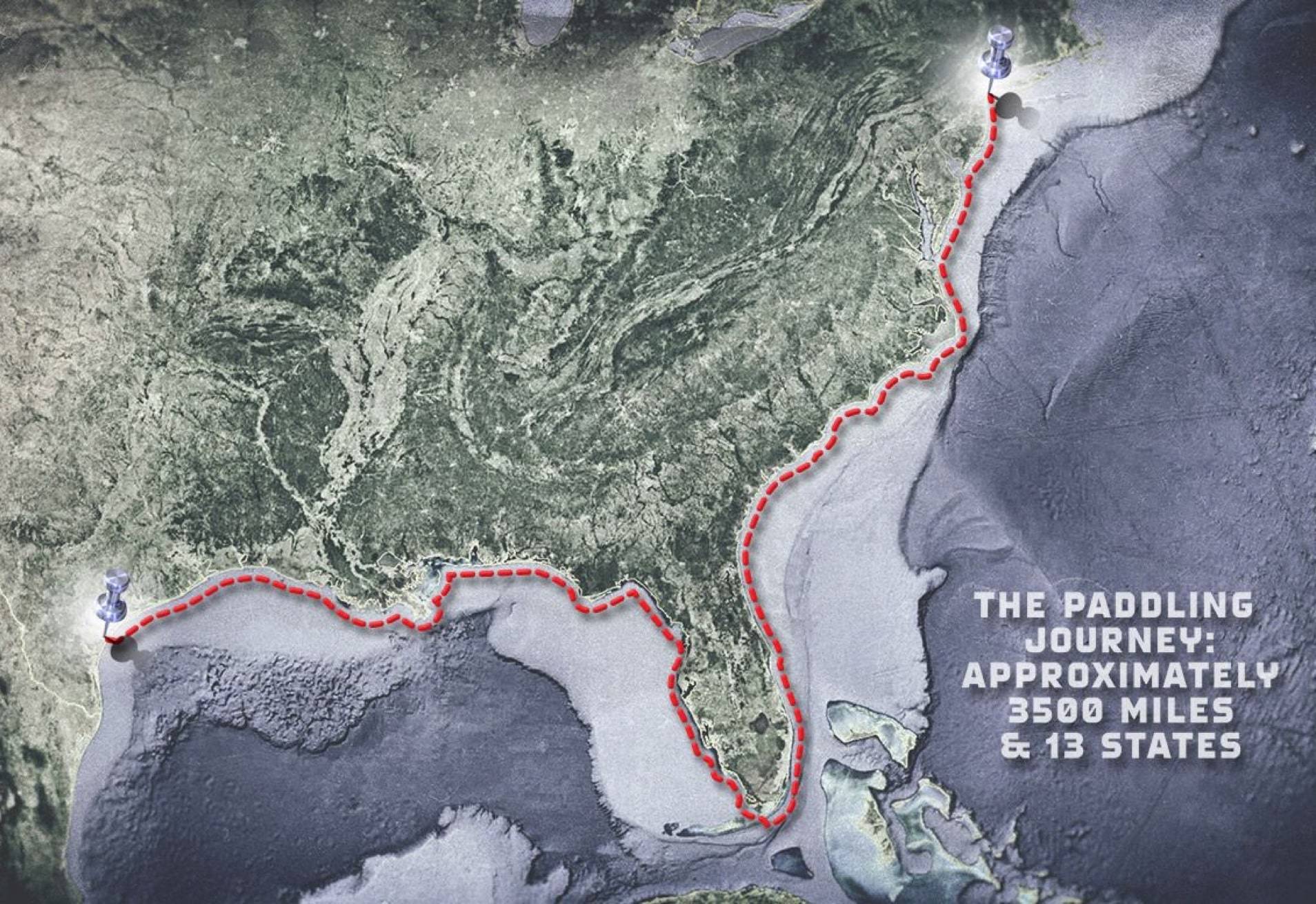 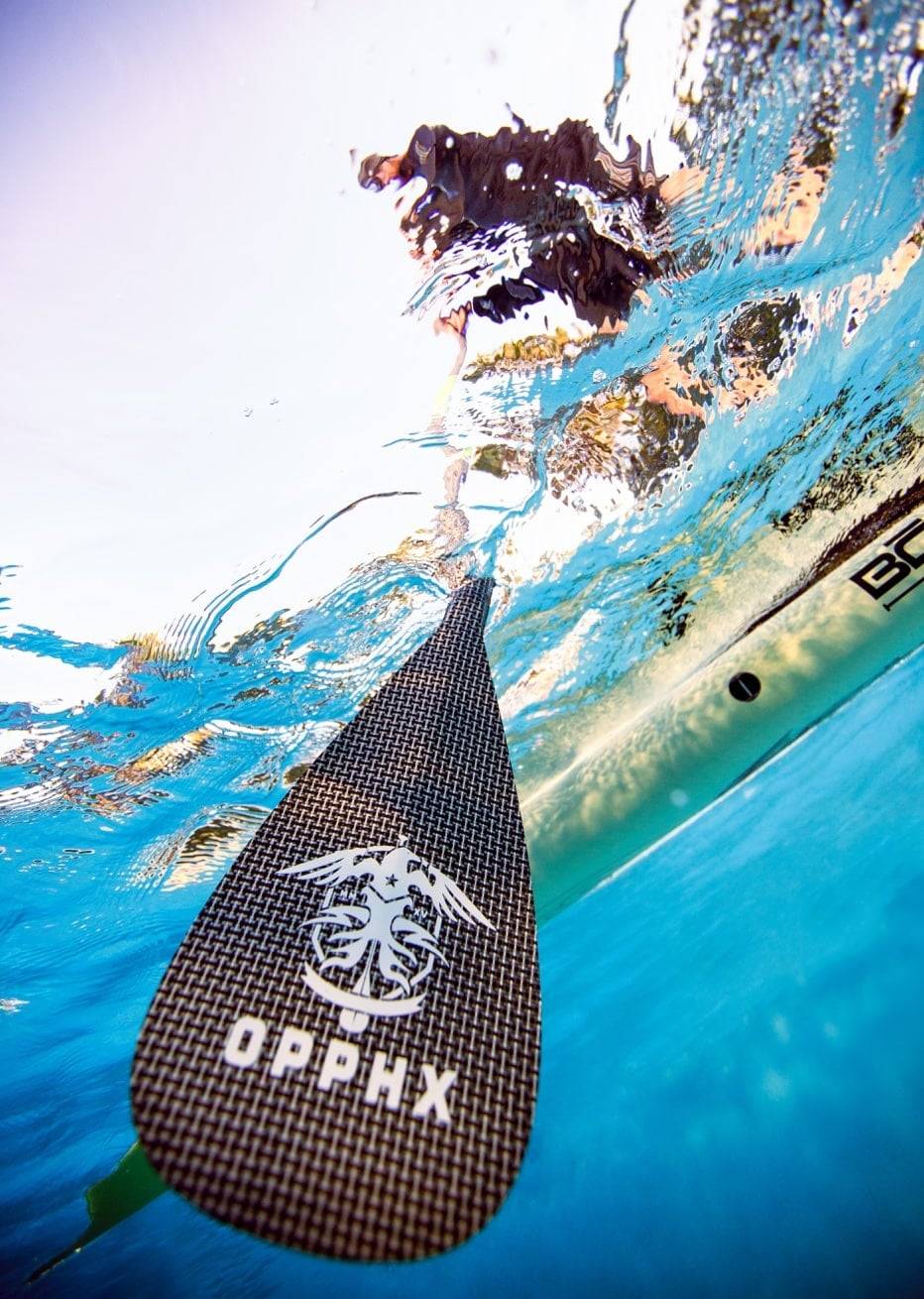 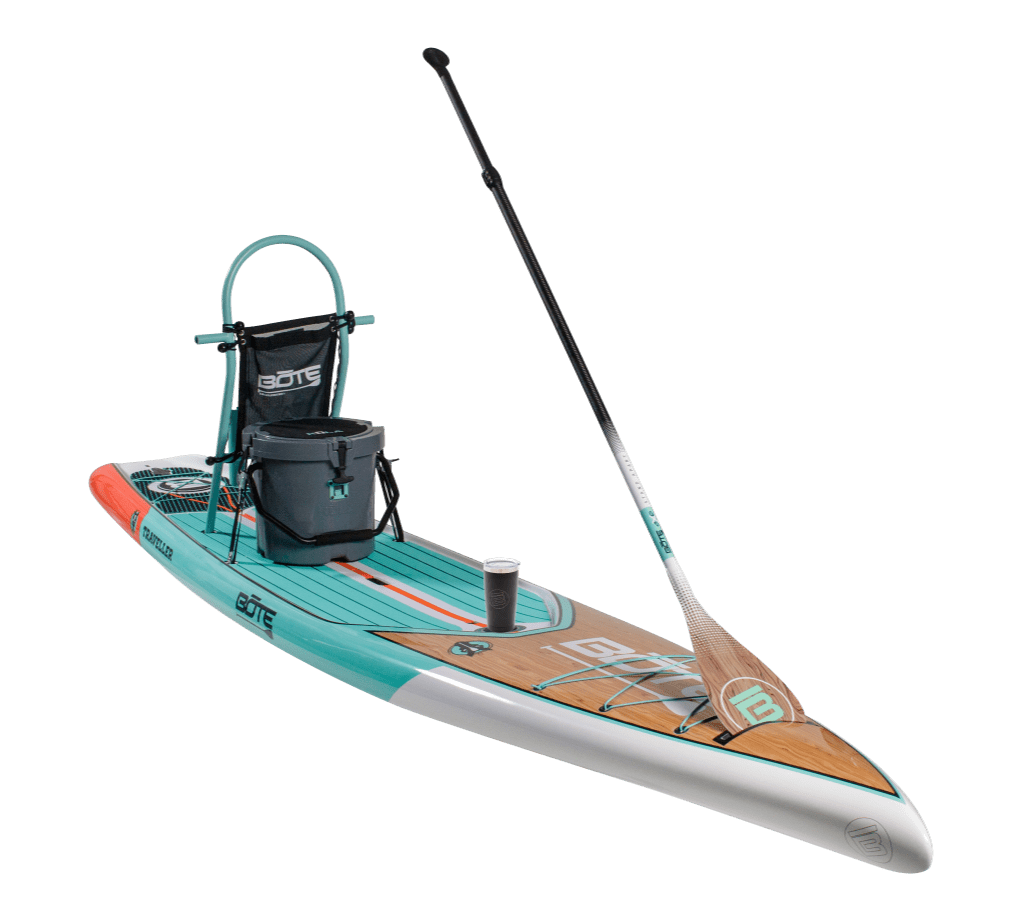 Training and expedition paddling are this board's forte. The Traveller Paddle Board's sleek and slim design paired with lightweight epoxy construction make it the perfect for going the distance.